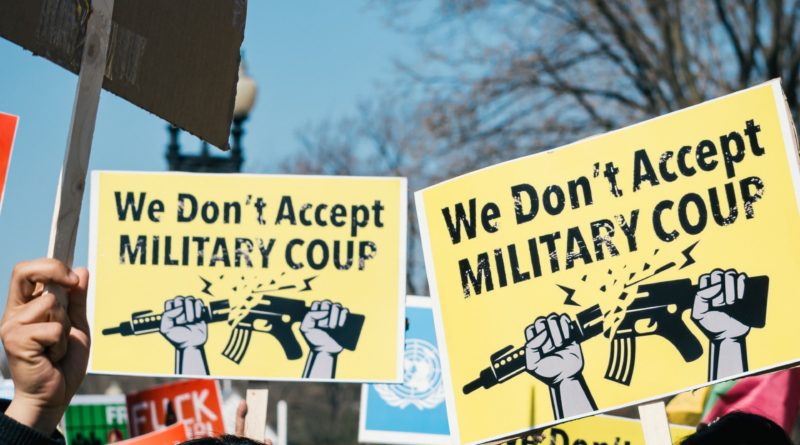 The coup d’état in Myanmar and the mass protests following it have been in the news on and off for the past months, with the headlines becoming increasingly gruelling. What are the people protesting against, and what are their chances of success?

Background to the protests

The current demonstrations in Myanmar began shortly after the country’s military, known as Tatmadaw, seized power on the 1st of February 2021. Detaining Aung San Suu Kyi, Myanmar’s State Counsellor (comparable to a Prime Minister), President Win Myint and other members of the governing National League for Democracy (NLD) party, the military ended the country’s civilian rule and transferred power to Senior General Min Aung Hlaing. In addition, the military declared a one-year state of national emergency and, in the following days, moved to block social media access and television broadcasts, as well as trying to suppress the first waves of protests and civil disobedience through police action.

The reasons for the coup centre around the November 2020 general elections, which the NLD won by a large majority (with 83% of the seats up for contention) but which were challenged by the military-backed opposition parties. General Hlaing cited the alleged irregularities and election fraud, of which there is no concrete evidence, to justify the coup. It seems clear, however, that the underlying reasons were fears of a loss of power for the military, which had begun to make small steps towards more democracy only in 2011, after pressure from the international community. With the coup on the 1st of February, the military prevented the new Parliament from being sworn in and certifying the results of the 2020 election.

Shortly after the coup began a civil disobedience campaign, led by hospital workers, and on February 4th, protestors took to the street for the first time in Mandalay, the former royal capital in the North of Myanmar, following a call to that effect made by Aung San Suu Kyi via Facebook. The scale of the movement grew substantially in the subsequent days as the protests were joined by students, teachers and other workers. On February 12th, hundreds of thousands of people were demonstrating throughout Myanmar and clashes with the police followed.

A turning point in the protests came on February 20th, when security forces in Mandalay killed two protestors, despite their being unarmed. While the protests continued on the previous large scale and a general strike was initiated, the military’s crackdown became more violent, with shootings and other killings quickly becoming the norm. In total, from the beginning of the protests to the 4th of April, more than 550 people have been killed by the military and its associated forces. Thousands more have been detained or disappeared during police raids.

Perspectives for the future and international response

Currently, no end to the conflict seems to be in sight as the fronts between the protestors and security forces harden with each additional death inflicted by the military. Indeed, in step with the increasing violence on the part of the military, some of the protestors have begun to form into a guerrilla-type force, training participants in basic combat or sabotage; there is talk of establishing a “people’s army” to confront military forces. Some observers have already drawn parallels with the Syrian war, warning of an endless cycle of violence that could continue long into the future. Meanwhile, the United Nations (UN) special envoy on Myanmar, Christine Schraner Burgener, has warned that a “bloodbath” is looming if no action is taken against the military.

Whichever way the next few weeks and months should go, one thing seems certain: The west, and the international community more broadly must act decisively to prevent the country from falling into chaos and civil war and make Myanmar a priority on their already crisis-ridden agenda. Until now, however, the international response has been limited to condemnations of the military’s actions and demands for the release of Aung San Suu Kyi and the NLD’s other arrested members. Beyond that, the EU, the US, UK, Canada, and other countries have begun to impose sanctions on the military. Importantly, however, concerted UN action within the framework of the Security Council remains blocked by divisions, notably by a Chinese refusal to impose sanctions.