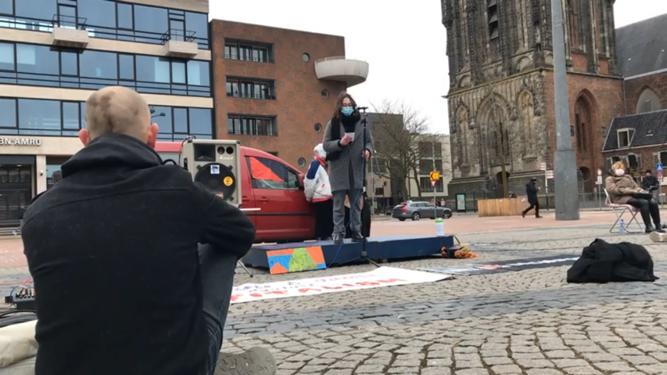 On Sunday 7th March 2021, the day before International Women’s Day, the Groningen Feminist Network, Internationale Socialisten Groningen and Women’s March Groningen came together in organising a sit-in protest against gender-based violence. The participants were mostly a diverse group of students and young people, and all unified by the message of equality and solidarity.

The particular attention during the protest was brought to the impact of the ongoing COVID-19 pandemic on the increasing number of gender-based violence cases. According to the UN Women in France, since the beginning of the lockdown on 17th March 2020, domestic violence reports increased by 30%, a similar situation occurs in other countries. Globally, 243 million women aged 15-49 experienced sexual and/or physical violence in the 12 months proceeding the announcement.

The protest had a clear, non-apologetic message of denouncing discrimination and violence against the marginalised groups and the cultural and systematic problems that lead to them. Max, a long time activist at ISG and GFN, who also co-organised the event, in the week preceding the protest said: “International Women’s Day has always been a day of struggle. We want to stand in the tradition of socialist and militant women and feminists who have founded this day, not only as a celebration but also as a day to call out social ills, oppressions and organise the fight against it. That also means that we really want to talk about systemic issues, things that cannot be fixed by merely having “diverse faces in high places” or individuals who succeed in playing the system.”

Those present at the protest could also sense the underlying solidarity. The organisers gave a platform for persons who experienced gender-based violence to speak about it. According to Helin, another one of the co-organisers, the protest combines the aim of bringing the general public’s attention to the protested issue and supporting the survivors. The participants seemed to have a similar view on the meaning of the protest. “As much as many people can have different opinions about it, I think the one goal that unites us is equality and fair treatment of everyone despite their gender,” said Anna, a first-year student and the participant of the protest “(..) No matter where you’re from, and no matter which rules are in your country, how gender inequality looks in your country, you should show support and solidarity with everyone.”

The chants: “The people – united – will never be defeated!” and banners saying “Feminists and Queers Against Capitalism” could alienate people aligning with certain political views. The organisers seem to be aware of that but stand their ground, not to compromise their values. “The message and the form of protest are of great importance, but we shouldn’t forget about our ideals and what we’re trying to achieve in making such a protest.” Zuzanna is a law student from Poland and one of the co-organisers and speakers at the sit-in. She also was involved in the October protest against the abortion ban in her home country. “We should be aware that we’re not gonna be understood by everyone. So we should balance the form that we use for the protest, but also be true to our ideas at the same time,” she added.

The murder of Sarah Everard

When talking about it a week later, it is impossible to omit the tragic correlation between the Sunday protest and the kidnapping and murder of Sarah Everard, an English woman from London, who disappeared on the evening of 3rd March during a walk home, and whose body was found on Friday, 12th March. The additional fuel to the fiery outrage that followed was the arrest of a police officer suspected of her murder, as well as the Saturday night clash of participants of the vigil with the police in South London.

The murder sparked a heated debate in the UK on how to protect women. However, quite often, the conversations steer from the topic of women’s safety to feeling safer on the streets or even the issues men have with the means to achieve that. Helin commented the outrage at Baroness Jones’s suggestion for a curfew for men: “At the same time, it was suggested that women should be safe and stay home at night, etc. Since when is that not outrageous? We cannot adjust to the kinds of violence we are suffering.”