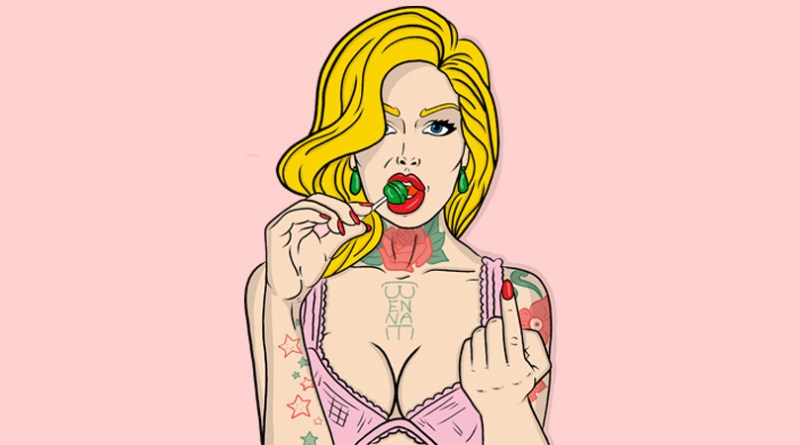 Threesomes can cause trouble, or be awfully disappointing. To prevent that, I can’t just gratify every couple that strays into my crosshairs. Should only choose those whom I think can deliver.

One such couple had been flirting with me for months. A friend and her well-built boyfriend. I returned their flirtations, but only teasingly. However, one day they invited me over, and I was finally in the proper mood to play. Gotta entertain yourself in these strange times, you know? Besides, due to certain anecdotes shared with me, I was curious to see her boyfriend in the sack.

They offered extra spice to secure my interest: acid. The girl wanted none. She was worried about a bad trip, and would keep up with drinks instead. The guy wanted less than me, “to stay focused”. Hmm. For me, a whole and respectable dose, because I know myself well. I wanted some intensity. Our evening went like this:

Once welcomed into my friend’s room, I wanted to set the tone. “First, let’s pray.” I say, taking each of their hands and reverently closing my eyes. They play along.

“Dear God. Bless this food as we take it into our bodies. Grant us beauty and strength. May we always walk in confidence. For Thine, therefore ours, is the kingdom and the glory forever and ever, amen.” After that, I let her boyfriend place the tab onto my tongue.

We spend time drinking and talking as the substances take effect. I enjoy both their presences. Everything glows.

I want to pay some kind of attention to my friend. Dark eyes, long dark hair, smaller than me. Petite. These beautiful, tiny, yet full breasts. Her loveliness was often a distraction. After a particularly sly comment, I pull her to bed. We make out. Her boyfriend tries to join, but I tell him no, to sit and watch. He obliges for the moment.

She touches me gently, as if she’s wondering if she’s allowed to. I press kisses into her as I disrobe her, I hold a hand steady against her back. She melts into my embrace. I get a little too frisky and graze my teeth on her neck. She holds me tighter and expresses a small “ow”. To test her, I graze more. Harder. She keeps making demure moans, but doesn’t tense up or ask me to stop. Ah, how good she was being for me.

From the edge of my sight, I notice her boyfriend has been adorned with ten leering eyes. Some of them floating off of his face. Oh no. I turn my head to get a full look at him. Fuck. Not this again. This always happens.

I’d deal with him later. I go back to what I was doing. She’s touching my thighs, then between my legs, where I am wet. I’m cupping her breasts, feeling them fit into my hands, playing with her nipples. Pinching slightly. She’s trying to finger me. I don’t want her to, so I tug back a fistful of her hair and give her a stern look. After that’s out of the way, I’m free to bite and lick at her tits- which are now gleaming with fractal patterns, and taste like fruit. With two fingers I tease her entrance while thumbing her clit.

The guy can’t deal with only watching anymore. He is suddenly participating. Fine, he can also be here, I decide. We tag-team her. My fingers, his cock. At the right rhythm, she sings. We’re overwhelming her. But at a certain point I extricate myself from the bed and sit down. I just want to watch for a while, I’m way too high.

I think Mr. Boyfriend wants me to be more involved. He keeps giving me eyes too, a lot of eyes, but I’m not having it. I watch for a while longer before my vision further warps. I decide it is officially my personal intermission and alone time. Cue the elevator music. I politely excuse myself from the room to explore.

Well, I got lost in the kitchen. Time becomes weird when tripping. Thirty minutes, several hours? There were snakes slithering across the walls. I was deciphering the basil, who whispered to me, “Do you enjoy living out these repetitive pantomimes? You attract what you believe.” Oh, God damn it, basil.

Eventually the boyfriend came to retrieve me, as it was all dying down. “All good?” He asks. “All good, just taking a break,” I offer.

He picks me up and carries me back to the bedroom. I am laughing, being difficult. Possibly that pisses him off. He tosses me onto the couch. His girlfriend is half asleep in the bed. I guess it has been a while, or the drinks were dragging on her.

“Wait, stop. Please.” I switch my tone to be more sincere, more open to him. I drop all my aggressiveness. I push gingerly against his chest. He backs off. “Okay, yes, I want this with you, but first I have a request.”

“… Please can you have less eyes? They’re too much. Make your face have only two eyes, please. I feel vulnerable. Even so, listen closely. After you have the correct amount of eyes, please don’t hold back with me.”

Now he seems frustrated, excited, but mostly confused. He doesn’t immediately answer, but reaches a hand to his head, as if to check for extra eyes.

I’m not threatened by his silence. I gently caress his face to reassure him as I elaborate my case. “Shh, shh. Hey, it’s okay. It’s just complicated to deal with so many eyes. You understand, right? Just stop having them for now. You can have more eyes again later, I promise. Please do it for me?”

God only knows how the hell this poor man is interpreting my begging. Despite the peak having passed, presumably he’s also high. We stay still for a long moment, staring at each other. Eventually I decide fine, I will just deal with his many eyes. “Nevermind, come here,” I pull him into a kiss. Apparently that was the solution, because afterwards he has a normal face again.

I won’t tell much more. Except: he took his time with me, sensations are heightened when high, and I had nice marks to remember the occasion. Mission accomplished. I didn’t realise that’s what my mission was, until I accomplished it. Congratulations to me and to everyone who made this possible.

After a few fitful hours of hallucinogenic sleep, they invite me to stay for breakfast. Well it’s past 4:30, I say, so I am allowed to go home now. I have to go make coffee and check the weather. Thanks for the fun, goodbye.