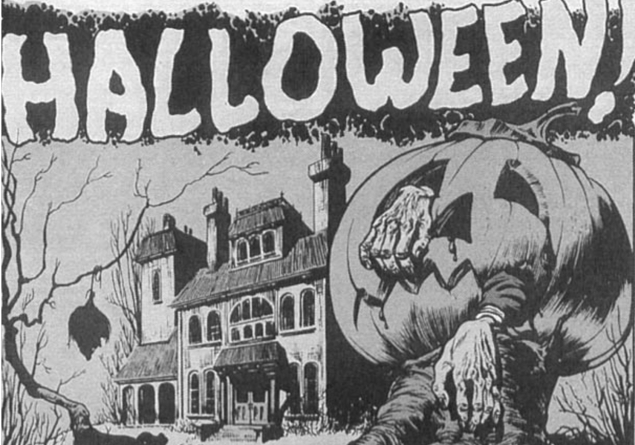 Trees are changing color, the temperature is dropping and you have an unexplainable urge to drink warm drinks and carve out pumpkins: Halloween is here. This night has arguably become the most important after New Year’s Eve, especially in America. Years ago, it was already estimated that 65% of American adults take part in the scary celebration and spend around $1.5 billion every year on costumes and another $3 billion on party accessories.[2] What history lurks behind this ancient festival?

Halloween finds its roots in ancient and medieval European celebrations. Specifically, a mix of cultural and regional traditions related to harvest, religion, superstition and death. The earliest antecedent of Halloween is the Celtic festival of Samhain.

The Celts, who lived in Northern France and the British Isles at the time of the Roman Empire, celebrated Samhain on October 31. On this day, the start of a new year and the symbolic death of the old one was celebrated. On top of that, it marked the end of the harvest season and the start of winter.

On October 31 it was believed that the barriers between the realm of the living and the dead became permeable, allowing the dead to return to earth. Samhain’s close association with death was also partially due to the aforementioned link with the harvest. After all, a successful one could mean the difference between life and death.

Once the Celtic territories were under the control of the Roman Empire, the Samhain festival was influenced by the elements of two Roman holidays. The first one, Feralia, remembered the dead near the end of October as well. Pomona was a celebration on the first of November which honored the Roman goddess of orchards and fruit. The link between Halloween and apples can be traced back to this Roman celebration.

With the spread of Christianity to the British Isles in the 7th century, the influences of Celtic and Roman traditions declined. Samhain was replaced by Christian holidays that commemorated the dead as well: All Saint’s Day on the first of November and All Soul’s Day, the day after that. Together, these feasts were known under various names such as Hallowtide or All Hallows.

The evening prior to these feasts was known as All Hallows’ Eve, which was eventually shortened to Halloween. During this night, Christians prayed for the departed souls and those facing judgment, while dressing up as saints and devils, and organizing bonfires. It was believed that the dead would return on this night. As a response, people left offerings of food on their doorsteps and wore masks when they went out after dark (and wanted to deceive the wandering spirits).

Some time later, a new tradition appeared; ‘souling’. This meant that the poor traveled from door to door begging for food and so-called ‘soul cakes’ in exchange for prayers for the resident’s dead relations.

Following everything mentioned above, one can clearly see the beginnings of the traditions associated with Halloween nowadays. While in The Netherlands Halloween is still upcoming, America has fully embraced the spooky holiday.

By the end of the 19th century, Halloween had spread through the United States and Canada and even penetrated New England. The years between 1890 and 1920 knew many localized folk traditions that yielded to the new Americanized Halloween. When vandalism became an (unwanted) element of the celebrations on the 31st of October, communities began to promote parties and community gatherings.[6]

The secularized celebration of Halloween remains a very popular one. Partly, maybe, because of “its elements of escapism, its appeal to children, and its commercial value to merchants and retailers.”[7]

Sadly, Halloween is out of the question for this year. But that can also be part of the fun. After all, what is scarier than social distancing WHILE watching a scary movie and eating something you cooked yourself?

One year ago, in a spontaneous moment, I decided to become a part of the Groninger Studentenkrant, and it was one of the best choices I’ve ever made. My passion for writing is enkindled thanks to the SK, and my studies English Language and Culture are fully appreciated here. I have a lot to thank the SK for and I hope to do a great board year in which I can put the SK on a higher pedestal.