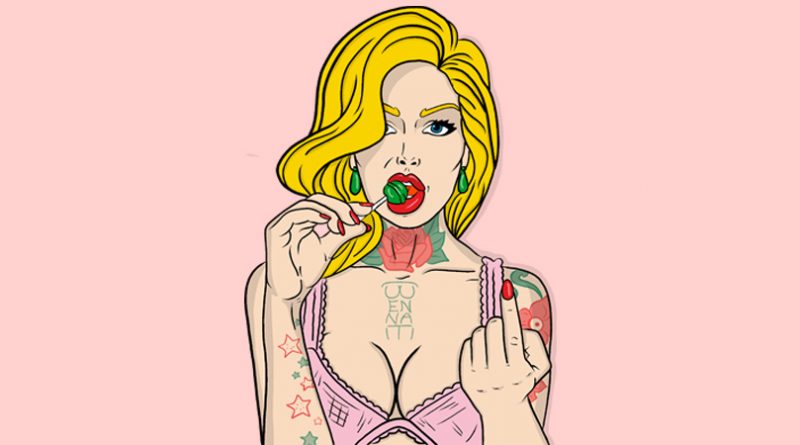 Another damned night. I’m drinking at The Dog’s Bollocks with friends. I’m regaling the lot with some cryptic analysis, which is what they enjoy from me. Feel a little tense, though, as if I’m waiting for a jump-scare. The conversation bounces on from their inner turmoils to their sex lives, and to how we should all just become strippers somewhere. I thoughtfully picture myself in skimpy lingerie, sliding around a pole.

Some completely wasted girl throws herself across the lap of the boyfriend of one of my friends. Asks loudly if she can please kiss him, while her own boyfriend watches on in anger. A brief vision of the two men brawling across the table vividly dances through my head, to my amusement, but the moment passes. We all laugh as the drunk’s boyfriend finally drags her home to prevent any more embarrassment.

Half an hour later everyone else decides to disperse, too. But, I don’t want to go home. I’m buzzed and very restless.

As I’m walking off alone from the bar, someone is suddenly beside me. A brash young Dutchie who’s split off from his pack going on ahead of him. “Lekker ding,” he slurs, getting much too close to me. “Hey, no thanks,” I mumble, trying to turn away.

“C’mon, you look like fun,” Did I look like fun? He slung an arm around me, boxed me in towards a wall, pressed himself against me. I felt a monster in his pants, and he smelled like tequila. Whaaat the fuck did he think this was, A Clockwork Orange? Hilarious. Didn’t want to play that sort of game with this one. I stomped down on his foot. He cursed and tripped backwards, and I hurried the fuck away.

More pacing around, then. A sexy butch girl smoking outside Smoke makes eyes at me as I pass by. But I’m not in the mood for that either. Feeling defensive, lonely, despondent and picky, I go sit by the canal to introspect and stare into the dark water. Yes, a bad unsocial habit, yes, I realise I’m not a broodingly tormented 19th century poet.

Who knows how much time has passed before I hear a voice to my right. “You want some company?” He introduces himself before I can tell him to fuck off. Lights up a joint to share. Apparently an Italian exchange student who feels the need to extensively brag that he enjoys both math and philosophy, as if that is outside the realm of possible combinations of interests and makes him an exceptional renaissance man.

I’m resigned to it all at this point, so, fuck it. Next second we’re in his room. His dick is long and thin, just like his skinny, slightly toned, bony body. Not my type. Yet I allow it. He puts on a condom and I ride him adeptly until he comes in an opera of whining sighs. Running my hands all over his ribcage and chest, occasionally reaching back to feel his balls as I move rhythmically up and down, back and forth, slower and faster. If I rock myself back at a certain angle, it hits against a tender spot deep inside me and makes a nicely sharp pain. Overall, it’s okay. But I am not really there. I knot the used condom and fling it towards the trash. It lands on his desk.

Somehow the pillow talk floats to our bed preferences, and I see his snake rise up again when I hint that I’m a bit extreme in my ideal sexual circumstances. Certified freak, seven days a week, etc. “Oh, cool. I really like ropes,” He showed me a long, pretty looking silver cord, which was waiting patiently in the bedside stand for this exact moment. “Mind if I tie you up?”

Eh. He was asking so nicely. If he was dangerous he wouldn’t have asked, right? Would have just done it. Does anything even matter? I nod yes to him. He makes quick work of binding my wrists to the bed frame. Kisses down my body, fingers me a bit. Unmoved, I hold an empty expression.

Suddenly he pulls out a switchblade, flicks it open and holds it in front of my face.

Oh. Aha. Jesus Christ. Ok, now my heart’s racing and my attention is fully rapt. Is it really going to end like this, now? I knew it might happen, but I didn’t imagine so soon. Thought someone might burn me at the stake in the Grote Markt. Maybe stabbed by a torrid lover in a crime of passion. Possibly fed to lions.

But, sliced into ribbons by some shy Italian? Butchered here in this shitty student room? He didn’t even seem the type. That didn’t seem fair. This all passes through my head in a split second as I try to pull my legs back to kick him, but he has them pinned with his thighs. I pull at my wrist ties and realize they’re not budging. Well, you know, I can’t fight fate. So I go slack… flutter my eyes…

A look of horror dawns on his face. “No no no, in case you need to free yourself!” He sets the knife down next to us, where I guess maybe I could reach it if I really tried. Holy fuck dude, like you didn’t think that might scare a strange girl you just met? I burst out laughing at him until I’m almost crying. I realise this is a risky reaction but I can’t help it. I’m not sure why it struck me as so fucking funny. The mood is ruined. His snake falls down and he can’t get hard again after that. Seems defeated. Oh no, what a pity. So he unties me and I dress before fleeing into the night.

You know, that’s enough adventure for one day, even for an adrenaline junkie like me. What goddamn coyotes and little dogs infested this city. Funny and exhausting. Taking no more risks, I go home and get myself off to some recurring fantasies before passing out.