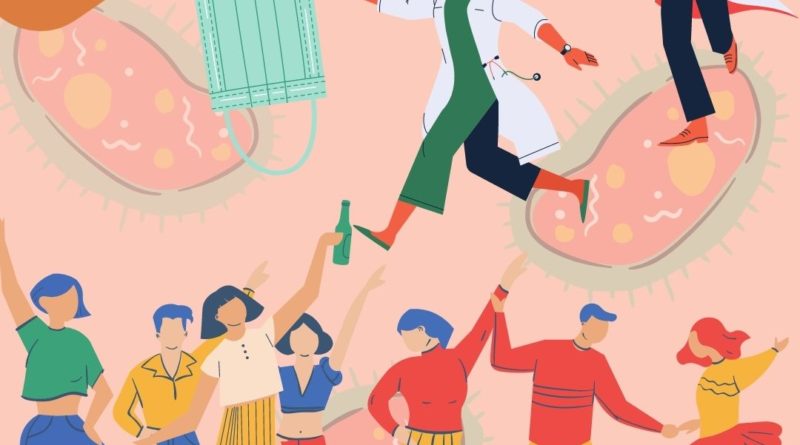 The discussion regarding measures against the novel coronavirus has become more heated again in Groningen. Yesterday, a member of the Dutch student association Vindicat published a piece in Ukrant that has sparked discussions among students. The article argues going to parties is a valid decision amidst recent spikes in cases, and something we should now have the right to do after our collective effort in 2020. What does this mindset mean for the upcoming months and student culture as a whole? Perspectives from two students.

Everybody knows it: shopping takes time these days, and it seems students have accepted disinfectant as a mandatory utility for supermarkets and shops. In some cases, you are standing in the pouring rain that often blesses Groningen, waiting in line to enter. I catch myself getting impatient sometimes, but hey, less customers inside at once sounds like a fair concept to prevent the new infections that have been steadily creeping into Stad.

Unfortunately, not everybody believes this to be valid: A week ago, a man in his 40s took a look at a shop queue, his expression disgruntled. “Why are so many people waiting? Why are not more people inside,” he barked, moving closer to the doors as he was rambling.

“There is only a certain number of customers allowed inside at a time due to covid-19 measures,” I coolly explained, trying to maintain a somewhat casual conversation. But my hunch was confirmed as soon as the man laughed blissfully, making clear that the coronavirus is a hoax created by the government to keep us inside and not enjoy ourselves. Nice, I didn’t expect to encounter a conspiracy theorist on a Thursday evening, but you never know. After trying to point out that I knew a fair amount of people that had had it, and how it wasn’t a joke, he jumped the queue and exited the conversation.

Even a week afterwards, I am thinking about where this mindset comes from. Sure, if we were to pin it to geographical factors, Groningen is technically more of an ivory tower than the remainder of the Netherlands. For the longest time, we were even doing a decent job of keeping new infection numbers lower than the rest of the country, but that doesn’t mean the pandemic does not exist.

Fast forward a week, and my Instagram feed is spammed with messages about a student called Fay. The confident justification of large house parties and clubbing during these times is largely based on impatience, and wanting to “just live your life” after a sucky year. Ironically, the Vindicat member has experienced firsthand what an infection can entail, as her brother had contracted the virus earlier in 2020.

In essence, the discussion takes place in two separate spheres: that of student associations, and the rest of the city. Hypothetically, it’s wonderful to want to keep the party life going, and dust off the cringey You Only Live Once mantra for old times’ sake. But our own perception of the problem doesn’t make it any less significant for others at risk.

Thinking of fraternities as one entity that can divide and conquer is the crux of this situation. Assuming things will “just be fiiiine” may likely end student life as it is now, for as long as we can see ahead. Numerous pubs and bars have received complaints from guests not following the rules, which has effectively shut down some establishments for several days. With new cases spiking in the last few days, it is questionable in how far we will still be able to enjoy what we have under current measures.

As others keep on pushing to somehow adhere to the rules in order to return to normal, the fraternities stand firm with their herd. If this perception of immunity – or superiority to others – is an indicator of the following months, I don’t expect concerts or events to be happening. And all because some just couldn’t wait.

Rumor has it that within a week’s time, it is supposed to be announced that pubs will need to shut their doors to customers after midnight. I guess we should let Fay party – at least while she still can. After all, hindsight is 20/20.

As of this week, Groningen has joined several other regions in the Netherlands with rising infection levels. A large amount of these infections are taking place among young adults, particularly students. Both the mayor of Groningen and Prime Minister Rutte warn young adults to stick to the corona measures: keep 1.5 meters distance, avoid busy places and big crowds, stay home if you’re sick. This isn’t 100% achievable, but is it really so hard? According to Fay van Odijk it is, along with at least 60 other students who just couldn’t help but have a big party.

“Please don’t assume that we think the rules don’t apply to us,” she writes, after clearly demonstrating in the paragraphs above that this is her exact mindset. Going to a different party every day during KEI week, going to clubs and then to people’s houses, dancing with no social distancing, 60-person house parties: does that sound like following the rules?

According to Fay, it is our generation who is going to have to ‘solve the country’s crisis’. I find this very funny, considering Fay is probably not working overtime at a hospital to care for dying patients, or laboring away in a lab to find a cure for covid-19. In case you haven’t realized it yet: my generation (Gen Z) is only just starting to finish their studies and entering the job market. Meanwhile, millennials, Gen X-ers and boomers (for all the flack we give them) are the ones governing our countries, helping sick people, and so much more. If our country’s future lays in the hands of snotty students who feel entitled to infect others because they just have to get black-out drunk and dance in sweaty clubs, we might as well be doomed for eternity.

Fay also says “the virus doesn’t pose a big risk to my and other students.” Besides the obvious fact that you might infect others as a result of your selfish behavior, this isn’t true for everyone. Being young does not make you immune. I have asthma and during the winter I cough so much it feels like I’ve swallowed razor blades. Corona could do serious damage to my already weak lungs, and I’m not the only young adult with a pre-existing condition. What’s more, even for those who were perfectly healthy beforehand, corona can leave permanent damage and scarring to your lungs and inhibit full lung capacity for the rest of your life.

I was proud of Groningen for keeping infections and deaths at such a low number for so long, but now I have to say I’m ashamed of my peers. I go outside to get groceries, go to the few in-person classes I have, gather with my fellow SK writers, and maybe have a drink with my classmates, never with more than 10 people. Fay and her party fanatics don’t speak for me.

“It’s been six months, and I want my life back.” I’m sure the hundreds of thousands of victims of corona would love to say the same thing Fay, but they can’t. They died.