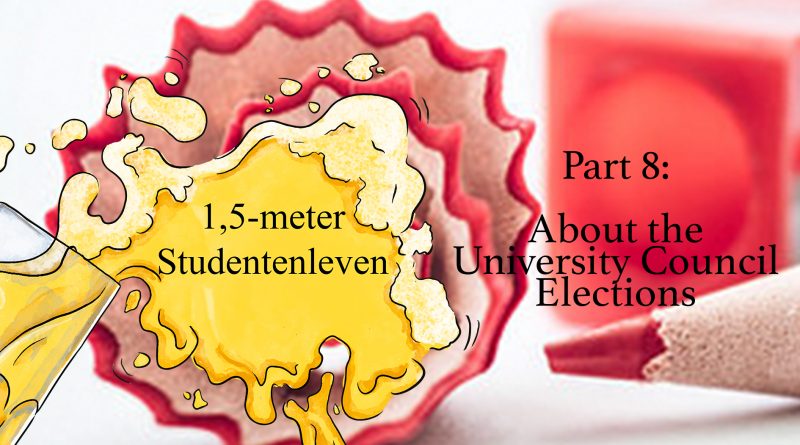 It is a special week, but I guess you have already noticed. A political mudslide on social media. With parties you have never heard of before, candidates who you apparently befriended on Facebook and points of view that all look the same. In other words: The University Elections.

Now, firstly I should state some reservations. As you already know, your favorite columnist is a candidate for two of these councils as well. He is even a Party Leader, for a party whose name I can not mention, because of my journalistic independence. Integrity is one of my key values, in this series of columns I often judge those who do not respect our journalistic or academic values. Then it would be quite contradictory if I would preach my candidacy for The Independent Student here, which I will, therefore, refrain from.

Having said that: University Elections. These elections are essential to you as a student, even if you have never heard of them before. The influence of the University and Faculty Councils on the university policy can be great, as long as all parties work together.

The University Council consists of twelve yearly elected student representatives and twelve biennial elected staff representatives. They have power over the University’s budget (where does my money go), the student statutes (What rights do you have as a student?) as well as on compensating measures because of study delay (How much money can I get because of corona?). Of course, the Council has power over many other topics, but that will not fit in one column.

The three responsibilities mentioned above: finance, student rights and compensating delay are essential in times of corona. The University is spending tons of money to make sure all students and staff can work from home and to enable digital education. These expenses should be checked on and be done responsibly. Therefore you should make sure to vote some competent people into this council, people who know how to deal with public funding.

Next to that, the rights of students are continuously treated with contempt. As some faculties decide to demand microphone and webcam access on their students’ laptops. They present it as a take-it-or-leave-it option (I’m looking at you, Faculty of Economics and Business). That shouldn’t happen, so make sure to vote for a party that dares to take a stance.

Furthermore, the council needs to fix compensating measures for students with study delay in a responsible manner. It might seem tempting to vote for a party that proposes the highest sum, but keep in mind that the University (with a current budget deficit of 10 million euros) needs to be able to pay their bills next year as well.

To summarize: You have got a choice this year! Despite the apparent overlap in views between parties (because who wouldn’t want better housing, education or digitalization?), the true differences between the parties show in their manifestos and candidates. For example, when it comes to diversity (Everybody opposes racism) SOG and DAG choose for mandatory anti-racism classes, a measure strongly opposed by the other parties.

The real differences are up for you to discover. I can not do that for you (again, journalistic independence). So: read those party manifestos and check out all of the candidates. But more importantly: use your democratic right. Go out and vote!