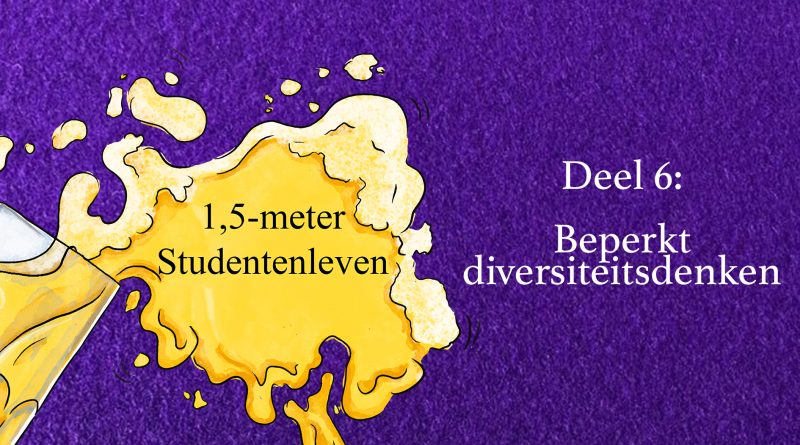 Last week I shone a light on managers. It resulted in lots of comments from you guys, as well as interesting Twitter-discussions. The majority of you was however able to see the bigger picture in the column, it was an introduction to a more fundamental issue: the limited vision on diversity at the university.

Let’s go back to the fundamentals of this column: a student will live grand and compelling in the social, cultural and academic field of their student-life. Diversity is paramount in this. Value-based diversity for example, since you will never reach your full potential if you surround yourself with likeminded people. You will remain in your own purified thought-world of self-confirmation, for as long as you don’t get confronted with others with a different opinion. For example, you will see that those who call for freedom of speech the most, will also be the ones who will call the most for the limitation of the freedom of others.

The importance of interaction with people who don’t agree with you should be something I won’t need to tell you. However, interaction with people who are indifferent has an unrecognized value on its own. It places matters in perspective. Are the things you worry about (for example the placement of insect hotels on bus stations), really that important? Even I get held up a similar mirror, but not last week.

Diversity is for all of us. Even for the white heterosexual, educated male. That might sound weird, but it is an absolute truth. Several study associations have introduced anonymous application procedures for meetings with companies. Not only to benefit students with a non-Western background, but the Dutch male student as well. Without anonymous application procedures, 80 to 90 percent of the selected applicants would be white Dutch woman: Dutch men didn’t stand a chance.

The appointment of a diversityguru for half a million euros (!), who will limit themselves to gender diversity, has no place in establishing real diversity. It shows the limited vision on diversity from the university.

The services in which I would like to invest the guru funds, are services for students with vision impairment; who are hard of hearing, or wheelchair users. If your current thought-bubble looks something like: “This has nothing to do with me!” You are dead wrong. Those services are vital for you as well!

The scenario in which you walk home at 3 A.M. from the Grote Markt, get hit by a car at Kokomo and end up in a wheelchair; might sound unlikely. But this can happen to you!

The scenario in which you stand too close to the speakers of Kokomo, Paradigm or Kopjek for too long and end up with hearing damage; might sound unlikely. But this can happen to you! Even the scenario in which a genetic disease or bacterial infection causes you to lose your vision.

In all cases mentioned above you need these services as a safety net, to ensure the continuation of your studies; being a full-fledged part of student-life and above all: to live grand and compelling. So even though you are currently living a carefree student-life, even you benefit from an accessible university. And not from a diversity guru.