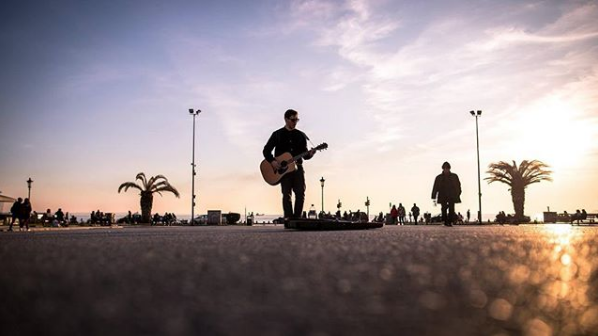 Moody clouds come and go, releasing short bursts of rain before beams of sunlight conquer the skies. Then the cycle repeats. People are passing by on their bikes, most of them caught up in their own affairs and getting from A to B quickly. Others wander the city center, listening to music and tuning out the noise of their surroundings.

A woman wearing Bluetooth headphones raises her eyebrows as she sees me. Stopping a couple of meters further away, she fumbles through her purse to pause the music that is playing.

The cold makes my hands tremble as I attempt to tune my guitar, but the weather is working against me. I cough between sips of Turkish tea a welcoming store owner has given me. The steamy glass slightly burns my fingertips as I try to rid myself of the numbness this rainy, unwelcoming weather makes me feel almost every day.

I hurry to finish getting my instrument in order as I see the woman with the Bluetooth headphones shake her head, seemingly reminding herself of her errands.

Play. She moves along.

No-one ever said it was easy being a street musician. Especially not in a country where having cash with you is becoming less and less common. As I have learned from traveling to different places with my guitar, being successful at street music is all about becoming an emotive chameleon. A person that can anticipate and successfully tap into the listener’s emotions, and switch up song selections instantaneously if need be.

No matter where I went to busk – be it Greece, Scotland, Bulgaria, Romania, the U.S., and now the Netherlands – the most important lesson I have learned is that no one really cares to look at you or even consider chipping in some money, unless what you do in some way connects with their current emotional state.

But long before this strategic approach became clear to me, my journey began in Germany. Making street music is something that started in my teenage years. Some of my classmates decided to do something for our school’s charity day that didn’t involve baking a cake. So there we were, five youngsters standing in Mainz in the Southwest of Germany, with only five songs to perform. The sun was shining bright, but that wasn’t the reason we were sweating. We had no idea how everything would go, or if it was going to be fun, yet we decided to just do it.

We were successful and even managed to raise the most money out of all students from our grade. This got me thinking: “Wow. I can actually make money on the streets with something I absolutely love? I should do this again.”

Fourteen years later, and my approach to playing in public has changed quite a bit. I try to gauge who is walking by, what mood they might be in, and which of the songs I can play might resonate with them in this moment.

Unfortunately, being a bearded, fully grown man who sings on the streets doesn’t make it as easy to impress as a jolly kid who does the same. The cuteness bonus wears off with age, and since street music is currently my only source of income, I often discuss ways to increase and maintain a stable level of weekly pay with other people.

“Just play what the people know, you’ll get more money then.”

To some extent, that is true of course. The main question I have always asked myself is this: Do I always want to play things I am indifferent to or dislike for the sake of receiving more money? That I feel no connection at all with? Doing so might increase profits, but lessen my motivation to play as I won’t feel the words leaving my mouth.

Instead, I enjoy turning Rock and Metal songs into tracks you might expect to hear on the radio. That way, I can transform more inaccessible songs and their emotive meaning into polished, slick versions for passers-by. And so far, the messages of these songs have almost always connected with people completely removed from the genre. Honestly, if someone had told me I would be playing songs by groups such as Korn or Deftones on the streets and make a decent wage, my teenage self might have responded how that would never work. I can now say that anything is possible, as long as the emotion of the song connects with the listener.

Then there is the aspect of superficiality. I have come across people who sincerely believe I am a homeless man with a guitar. After all, who willingly chooses such a weather-dependent, insecure job? Why not get a real occupation?

Well, quite frankly, this is my job, and the only one that I have ever truly loved.

And even though some days feel more strenuous, I thoroughly enjoy exposing my raw emotions through music on the street every time. Aside from minor fights with other street artists, people who pretend not to see me, and some shop owners shooing me away, this occupation puts me into my comfort zone by doing what others see as uncomfortable. And until my looks make it impossible for me to capture anyone’s attention, I will continue to sing the songs that make me feel.

Perhaps you’ll feel them too.