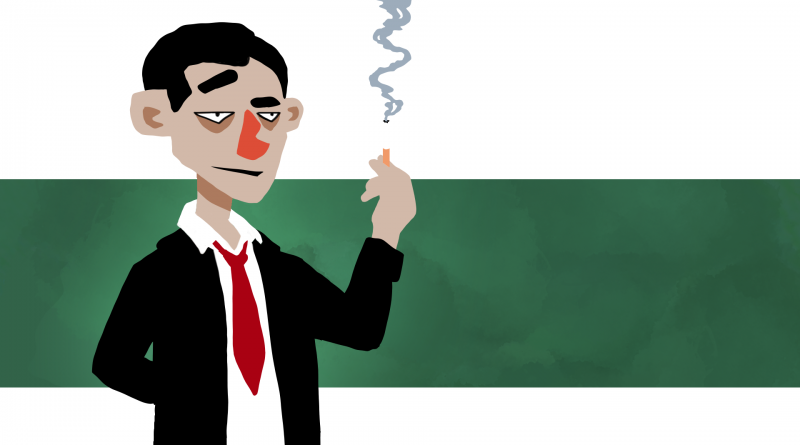 Advertising is based on one thing: happiness. These wise words kicked off my long and miserable battle with tobacco. I was 16 years old and captivated by the beautifully written AMC-series Mad Men, in which a large advertising firm from 1960s New York City plays a central role. During one of the show’s most memorable scenes, protagonist Don Draper tries to pitch an ad to the American Tobacco Company, producer of Lucky Strike, my favourite brand of cigarettes. Draper’s advertising proved very effective; a day later, I bought my first pack of cigarettes. Lucky Strikes, naturally.

The success of Lucky Strike’s advertising pitch wasn’t limited to yours truly; sales of Lucky Strikes rose from 23 billion packs in 2007 (the year Mad Men first aired) to 33 billion in 2013. My 16-year-old self alone wasn’t responsible for the sale of ten billion extra packs of Luckies (I promise). Cigarettes have been increasingly common in TV-shows in recent years – strange in a world that’s trying it’s best to kick the habit. In the 21st century, with its taxes, smoke-free zones and plain packaging, the cigarette still has a huge screen presence. I started my smoking addiction in a frantic attempt to be just as suave and cool as Don Draper. Are all those frenzied initiatives to get the population off tobacco even effective when the cigarette still gets such great representation in TV and film?

Research into smoking on TV by Columbia University has shown that since the ban on tobacco advertising on TV and radio went into effect (april 1970 in the US) smoking in series has been on the up and up. I’m honestly not at all interested in the reasons behind this phenomenon. The beautiful German docudrama Christiane F. Wir Kinder vom Bahnhof Zoo revolves around the horrors of the West-Berliner heroin scene of the 1970s, and demand for heroin hasn’t exactly risen since it came out. The argument on the proud smoker’s side here is that Christiane F. (highly recommended by the way) stresses the destructive effects of heroin. My question is; doesn’t the smoker see the same destructive effects of his own habit? Surely at this point we’re all aware of what we’re putting into our bodies with every drag? We’re confronted with the risks to our lungs, life expectancy and general welfare every time we buy cigarettes. Every smoker knows they’re playing a dangerous game.

A game we all know is dangerous and we’d all really prefer to quit, but unfortunately often can’t. The Trimbos Institute and CBS signaled in 2016 that a third of smokers have made serious attempts to quit the habit. Most failed. Only 5% of people who have tried to quit actually managed to kick the habit, according to CBS data. Many people talk about “personal responsibility” when it comes to smoking. People aren’t looking for a government to butt in and lecture them about risks. “We’ll run our own lives, thank you very much” or “There’s such a thing as free will,” according to Marianne Bloos, head prosecutor in the case against the tobacco industry. The public prosecutor ended up not prosecuting the tobacco industry because, according to Bloos, people have free will and “the dangers are printed in bold.”

Prosecutor Bloos is wide off the mark here. Bold words about danger and plain packaging may work wonders for adults 25 and over who’ve never so much as touched a cigarette. For teenagers, not so much. The part of the brain responsible for risk assessment isn’t fully developed until after our 24th year. Alarming text and ugly packs won’t keep the rebellious teenager from smoking. Teens want to look tough and fit in, maybe even – like myself – look like Don Draper! They want to be seen with cigarettes. Be seen as the tough grown-up who smokes. Bland plain packaging with clear warnings won’t temper those desires in angsty teens. They just see ink on a cardboard box screaming meaningless warnings about possible consequences they won’t have to face for years and years yet. Rebellious teens become nicotine-dependent adults, the cycle of addiction continues and the cigarette industry profits gleefully.

How, then, to stop 16 year old Mad Men-fans from buying cigarettes? They’d be better off spending their money on tailored suits or Brylcreem to obtain the coveted Don Draper look. If only I’d known this earlier I might not be writing this piece with a Lucky dangling from the corner of my mouth. My fifteenth attempt at quitting failed yesterday, when I started the fifth season of a certain show following the ins-and-outs of a large advertising firm in 1960s New York City. How did I fall off the wagon? I saw the protagonist light a smoke and had to join him. My home in the Haddingestraat is just a hop, skip and a jump away from the Albert Heijn on the Vismarkt. En route I asked myself “would I still go to get my Luckies if I had to walk to the other side of town to get them instead?”

Nicotine addiction is a blight on society. In the view of Secretary of State Blokhuis (ChristenUnie) smoking remains ubiquitous because cigarettes are cheap and easy to get. This man is right on the mark. You can get cigarettes on every corner. The barriers to access are far too low. To really get teenaged would-be Don Drapers away from cigarettes the city of Groningen could make efforts to drastically reduce the amount of tobacco sales points. This way, Groningen really can become the nation’s first smoke-free city.