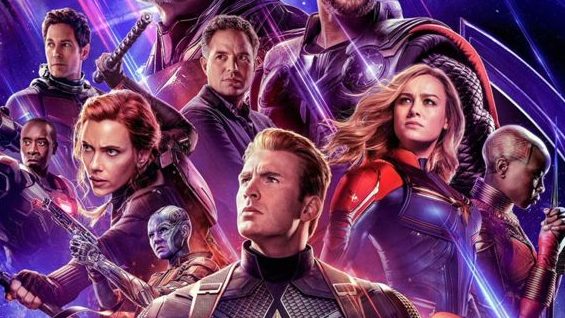 Warning: This article contains spoilers for Avengers: Endgame, the new Spider-Man trailer and almost all preceding MCU-movies. Continue reading at your own discretion.

They’ve done it, after eleven years and 23 movies, Marvels’ cinematic universe reached its apotheosis in Avengers: Endgame, the ultimate smorgasbord of all comic movies. Years of plot, character development and worldbuilding culminated in a epic finale, it was beautiful to say the least.

However, things do not end there. Even though the three phase-spanning Infinity saga has been concluded, Marvel is still pushing out movies like there’s no tomorrow. But where will these movies take us? What corner of the mystic, cosmic and outright weird Marvel-universe will be explored on the silver screen next, and what do studios have to do with it?

We’ll start off easy. This summers’ Spider-man sequel, Spider-man: Far From Home is the final piece of the phase 3 puzzle. Just like phase 2 ended with the completely adequate Ant-man, phase 3’s swansong will be the second part of the world’s favourite webslinger.

The new trailer, released after Endgame’s spoiler-embargo dropped like a whale from the sky, might point some fingers into the MCU’s new direction.

One of the movies characters, Quentin Beck – better known as Mysterio -, played by Jake Gyllenhaal, mentions the multiverse in the second trailer for the movie. For the uninitiated: the multiverse-theory entails the idea that there are possibly millions of different universes parallel to our one. There might be a universe in which the writing for Game of Thrones this season isn’t absolute dogshit, or there might be a universe in which Madonna didn’t butcher her performance like a mafioso butcher trying to settle a score with a particularly unlucky cow.

This could mean we could see different versions of characters we know. For example: there might be a universe in which Captain America’s Peggy Carter would down the super-serum, with her taking up the mantle of Captain America whilst Steve Rogers gets a suit of armor from Howard Stark, a scenario that’s going to be explored in Disney+ Marvel: What if animated series.

However, one very important notion to take into account is who mentions the multiverse in the trailer, namely Mysterio. In the comics, Mysterio is a disgruntled special-effects expert with a penchant for lying, deceiving and using illusions (they’re called illusions mom!) skills he uses for well, villainous purposes. So the fact that a scheming, manipulating villain mentions the multiverse, should be taken with a grain of salt.

Luckily Spider-Man: Far from Home isn’t the only movie on Marvels’ slate. For the coming years several new projects have been announced.

Like (As)guardians of the Galaxy vol. 3. After James Gunn got fired and rehired again, and after Thor decided to join our intergalactic band of misfits, Marvels’ cosmic clowns might go in a different direction. A few things are (almost) a given, such as the search for the alternate-timeline Gamora or the inclusion of Adam Warlock, as teased in Guardians of the Galaxy vol. 2’s post credits stinger.

If we take the cosmic nature and Thors’ inclusion into account however, plus a small cameo on the Grandmasters’ tower in Thor: Ragnarok, Beta Ray Bill might make an appearance.

Beta Ray Bill is a character from the Thor-mythos, a horse-like alien who – despite his monstrous appearance – was actually the first non-Asgardian to be able to lift Mjolnir. Maybe they’ll introduce him in a skrull-like way: setting him up to be a villain, but showing his true, more friendly nature later in the film.

Up next on the slate is Doctor Strange 2. Benadryl Cobblepatch is set to return as the sorcerer supreme, and despite a post-credits scene confirming Chitewel Ejiofors’ Baron Mordo to the dark side, the villain-name that’s buzzing around in the world of rumours is Nightmare: a terrifying guy on a horse who is in control of the Dream Dimension. Which means: A: apart from the Dark Dimension, earth’s’ top wizard is now going to explore another dimension and B: Baron Mordo’s got to wait, or they’ll make him a secondary villain, which is about as wasteful as our current economic climate.

These are the movies that have some plot details revealed. Black Panther 2’s been announced, but no details are confirmed, except that Ryan Coogler is said to return as the director, which is a goddamned blessing.

A movie that’s also in the works is The Eternals, about a race of vastly overpowered people. Angelina Jolie is set to play Sersi, opposite Richard Madden, who’s rumoured to play Ikaris, with Kumail Nanjiani in a as of yet undisclosed role. Details are sparse, but apparently it’s going to be a love story or some other sentimental shit, we’ll just have to see how Marvel can make it work.

Also confirmed to be in the works is Shang-Chi, the first Asian-led superhero. Apart from its director, Destin Deniel Crettin, nothing is known about this movie, apart from the fact that there will be a lot of kung-fu.

There has been, however, a far more impactful change within the MCU, one that has been years in the making, done completely backstage: Disney has acquired 20th Century Fox. You might think

‘’Jee-fuckin’-jolly, that’s neat.’’ but that acquisition is very, very lucrative for the MCU: in the nineties, Marvel was struggling to make dough. So they decided to sell movie rights to the highest bidder: Sony got Spider-Man, Universal got the Hulk, 20th Century Fox got X-Men and the Fantastic Four and the rest didn’t sell. Because of that reason, the MCU has been lacking certain character. A deal had been arranged for the inclusion of Scarlet Witch and Quicksilver in Avengers: Age of Ultron, which were classically X-Men character. A similar deal had been reached with Sony for Spider-Man, so he could appear in Captain America: Civil War and al subsequent films.

This means that in a couple of years the Fantastic Four and X-Men could join seamlessly into the MCU, as would their villains, which brings me to my next point.

Thanos is destroyed. He has been stopped by the same power he wanted to have so badly, deader than dead in two timelines. This means there’s an opening for the position of big bad, the overarching threat that forcer our heroes to overcome their differences and go to town on that villain like they’re coked-up MMA-fighters.

However, there are only a few threats that can match up to the fucked-up Grimace-face of Thanos, and most of them come from Fox, or more specifically, the Fantastic Four.

We’ll start off with a villain that might pose a danger for a (new) Avengers team: Annihilus. Annihilus is a Fantastic Four villain and ruler of the Negative Zone, a universe in which all matter is negatively charged. It doesn’t sound to interesting, unless you take into account that the Negative Zone is the cause of the big crunch, a hypothetical endgame for our actual universe. Annihilus is a threatening presence, wielding the Cosmic Space Rod, which – apart from being a great name for a penis – allows its wielder to rearrange matter or even destroy it.

If Marvel wants to stay on a cosmic path, Annihilus is a good – albeit safe – replacement for Thanos.

Up next is Galactus. Galactus is a hungry man, a very, very hungry man. He’s also bigger than most planets and sustains himself by eating planets. He also wears a weird, purple helmet.

Galactus is the cosmic threat in the Marvel universe. Where Thanos was somewhat human, having emotions and motivations and stuff like that, Galactus is more a pure force of nature and destruction. He is able to swallow planets like he’s high as a kite in front of a bowl of M&M’s and can go toe to toe with actual forces of nature like Infinity or the weird-as-fuck Living Tribunal. If they want to stay cosmic, but want to one-up that shit like it’s Mario, Marvel should go all-in on Galactus. Personally I’d cast Bryan Cranston, because he’d be the only one that could still be intimidating in a weird-ass purple helmet.

But instead of going bigger and better, Marvel might take a step back and make its villain smaller, more personal, but more threatening than ever. There is a theory that all living villains which are still wandering around in the MCU, might team up to take down earth’s’ mightiest heroes.

These villains include: Justin Hammer (Iron Man 2), The Abomination (The Incredible Hulk), Leader (The Incredible Hulk), Baron Mordo (Doctor Strange), Baron Zemo (Captain America: Civil War), The Mandarin (the actual mandarin, as teased in the one-shot Long Live the King) and even the one-off villain Batroc the Leaper (Captain America: Winter Soldier). Maybe set these guys up in a ‘’Earth’s Deadliest Villains’’-kind of movie, and have them face-off against a new, fresh team of Avengers in a final battle that makes Civil War look like a kindergarten fight. It’ll be the perfect way to confront our heroes with their own failures, and would make for some great storytelling. Plus any excuse to bring back Sam Rockwell is a good one.

Speaking of human villains, there is one name that must be mentioned: Doctor Doom.

After fucking him up in three different Fantastic Four-films, it’s about time we got this guy right. He’s the leader of the sovereign nation of Latveria, is as technologically savvy as Iron Man (rip) and as skilled a sorcerer as Doctor Strange. He even wielded the Infinity Gauntlet once, and instead of dying in a narratively satisfying fashion, he made himself God Emperor of a Battleworld in which shit was more flip-turned upside down than having to live with your auntie and uncle in Bel-Air.

If you want one guy, one human-ass guy being a threat that makes Thanos look like a bit of a retard chewing on rocks, then they’ve got to go with Viktor von Doom. Put Nicolaj Coster-Waldau in that creepy-ass metal mask and I’ll throw all my money at the movie theatre.

So there you go, predictions, speculations and cold hard facts about where the Marvel Cinematic Universe is going in the next ten years. Expect X-Men, expect sequels, expect Fantastic Four, expect more Beetleborg Cuddleyou, expect the weirdest reaches of the Marvel-universe that make Endgame look like playing Mortal Kombat against an especially stupid five-year-old.

There’s only one way to go from here for Marvel if they want to stay on top, and that’s up.

Absolute Senior of the Studentenkrant and above-board, professional nerd. Trying to get the people hooked on poetry for years, in between writing shamelessly left columns and harsh reviews on film or tv. If ‘he doesn’t get angry reactions, he did something wrong’.